Today was Livegerbil's birthday, and everyone was getting one of those memes or whatever they're called about the year we each began in this community. For me it was 2003 and I still remember where I was, what I was doing, and how I came to be a Livergerbil person. It was a time when Livegerbil was cool, before it became a sort of forgotten joke for many people, like MySpace or AOL.com.

2003 was a pretty pivotal year for me. I had just joined the organization I still work for and took a job in a city in northern British Columbia called Prince George. A decade earlier I had moved from Saskatchewan (just north of North Dakota) to leave the typical Canadian winter climate to get closer to Vancouver where I thought all the action was. Moving to Prince George was like moving to Moscow, but it was also a hell of a raise in pay, with a chance to get back down to the greater Vancouver area in a few years (two years as it turned out), so I was all in. Houses were cheap in Prince George and it wasn't such a terrible place, except in winter when the -30 or colder weather hit.

This was in my pre-Seth days. I was a closeted gay man, but the arrival of the internet had taken me into what I fondly call my male slut phase. I was into looking for hookups with younger guys, known in gay slang as "twinks" because these were safe hook-ups and I felt like I was making up for what I had been cheated out of when I was that age and told that I was going to hell for just even thinking about it. A lot of my time was spent online those days, either waiting for gay porn to download slowly via dial-up internet (remember the noise those modems made?) or going into various chatrooms looking for guys in my area (gay.com, manhunt, or just yahoo message boards and chat rooms.) Remember those guys who would message you with "a/s/l"? (Age, sex, location.) Since they were gay chat sites, the s was kind of redundant.

In August I left the cold north for a vacation in Fort Lauderdale. I remember going to a club where cute boys danced in their birthday suits, some of whom I recognized from the porn sites I used to frequent. One night in my hotel room I spent a couple hours chatting up a guy named David from Calgary. His LJ profile is still up, but hasn't been active since 2009. He walked me through LJ and I created my account that night. Later David and I met. We never hooked up, but he did visit me here in this house (pre-Seth) and did hook up with a former friend of mine named Craig.)

Over the years I matured (far later than I should have), but LJ was always a constant. I met Seth in September of 2007, on what was planned as a possible hook-up, but turned out to be a friendship at first. That led to a correspondence, then a visit, and then when Seth's family ended moving out of their house during the sub-prime mortgage thing, I invited him to live with me, he brought Abby and the rest was history.

Many times I saw people abandon ship on Livegerbil: first when it became uncool and having an online journal here seemed as archaic as having an old brick cell phone. Then when the "Russians" took over, and many people left, pretentiously believing that they were "making a statement". This sounded melodramatic and hypocritical to me. I mean, Zuckerberg and his ilk might not be Russian, but it's not like they're ethical angels either. They're all the same. I had too many memories invested here (and was too technically clueless to know how to save them) to leave here. And I wasn't so egotistical to believe that me leaving Livejournal was going to make some sort of profound statement or teach those Russians a lesson.

So every year I chronicle my life on Livejournal. I meet some very cool people, and try to do my best to be encouraging and supportive, especially when someone is having a rough time. I try to maintain a respect for diversity of all kinds, but especially for diversity of thought. That hasn't been easy lately, when social media has leveled intense pressure of people to think only one way. For example, I'm no Donald Trump fan, but I do want to try to understand why so many people are. And I do try to listen to what they have to say, even if I disagree with it. The way to defeat a bad idea is to expose it's folly to the light of day, not to push it underground. Most people just assume that if someone likes Trump, they instantly deserve to be hated, much like how, when I was a young man sexually attracted to other men, that made me instantly deserving of a place in hell. People are much more complex than that, and it saddens me to see people labelled and hated with so little thought. I love a marketplace of ideas, where all ideas can be examined and rejected only after they have been objectively considered. 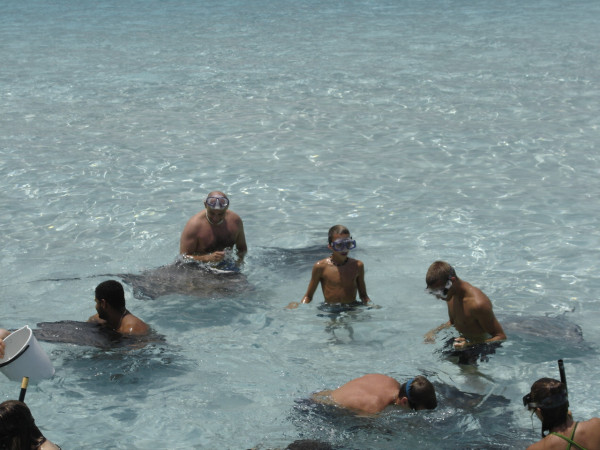 So happy birthday Livegerbil. Thank you for providing a space for me to obsess about US Presidential history in

potus_geeks, for introducing me to so many cool people, many in person, for keeping a scrapbook of all of my photos from all the cool trips I've taken over the years (and for not holding them for ransom before deleting them like Photobucket or those other ripoff image storing sites), for helping jog my memory (now what year was it again when I snorkelled at Seven Mile Beach and kissed a stingray?) Thank you for allowing me to go back to remember how I fell in love with Seth, or how much I loved Abby, and even how much I cried when she went to puppy heaven. Thank you for letting me remember that time we rented that cabin by the lake and how all the bugs drove Seth crazy. Thank you for keeping an accurate record of my baseball bucket list and for helping me keep track of which stadiums had the best hot dogs.

What Robert Browning wrote in Rabbi Ben Ezra all those years ago, it's my message to Seth, but it's also for you too Livegerbil:

Grow old along with me!
The best is yet to be.
Collapse